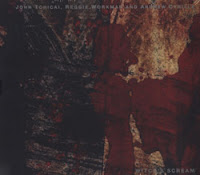 If three of the top players of the early years of free jazz join forces on a new album, then expectations run high. Saxophonist John Tchicai, 71 years old, has been part in shaping the European free jazz scene, bassist Reggie Workman, 70, has made a name for himself with musicians such as Coltrane and Shepp, Andrew Cyrille, 67, has played the drums for many years with luminaries such as Cecil Taylor and John Carter. You expect fireworks, yet it turns out the other way. The three play like they have nothing left to prove, and the record sounds like a nice enough excursion, but without any real surprises, without any power, without salt, without pepper. The CD has its good moments, especially in the improvizations, like on the first track, but then comes "Monk's Dream", with vocals by Tchicai who unfortunately cannot sing. It sounds sympathetic enough at first, yet it becomes irritating very quickly, and as well on other tracks such as "Proximity" and "Alice In Wonderland". Yet the trio ends the album like they started : well. The last piece "The Current" is luckily also the longest track, but it makes it even more frustrating because it demonstrates what the rest could have been. But again, maybe my expectations were too high to start with.
Stef on Friday, September 07, 2007
Share

This is sad, especially from an artist who produced such a masterpeice as Afrodisiaca.

Thanks for the info on this one.

my good....what a terrible review of an great album full of soul & a relexed view of playing.
this music is more than joyful...heartbreacking!

And...if you don't accept music like that...don't write about!!!

I recently ordered this cd and only afterwards found and read this review. So I approached the cd with some concern. But I gotta go with Anonymous, this is good stuff. And much of it highly adventurous music, at least to my ear. So I am not really sure what to make of the review. Apparently not to everyone's taste, but I think it is quite wondrous.

As you said "The three play like they have nothing left to prove"...and they do it 72 Minutes as whole full CD of Music.
Don't talk about what you want to hear. Talk about what you hear.
This is not plinki plonki impro, you'll probably prefere.
But this three have something to say...and you're not able to hear with you closed ears.

Don't talk about music you don't want to hear.
that simple.