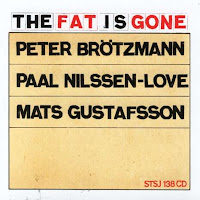 Recorded live at the Norwegian Molde Festival in 2006, this album brings three of Europe's most prominent free jazz musicians together. The three have of course played many times together in various bands, but never as this trio to my knowledge. The nice thing is that these guys are really great musicians and they play with an ease and intensity that is remarkable. The downside is that they're revisiting for the umpteenth time the same territory, and what was once considered as adventurous and leaving the beaten track, now sounds like haven't-I-heard-this-all-before? The saxes screech and wail, the drums thunder, with power and energy and intensity and relentless drive, once in a while slowing down but even then the blowing power is nothing short of ferocious. On "Colours In Action", there are some sensitive meditative moments after 21 minutes, but these don't last very long, because Brötzmann really wants to blow his lungs out, he really can't help it. The equally long title track offers some more variation, even with beautiful melodious and emotional parts, somewhere between sadness, anguish and anger, with the latter setting the tone for the rest of the piece, adding some fury and distress to the mix, moving back to absolute rage, just to end in some soothing shimmering bee-like humming, still full of restrained tension and false calm, taking even the audience - which never expected such a quiet ending - by surprise.