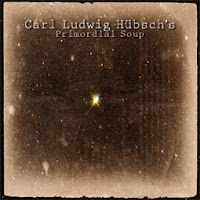 I am not a true fan of free improv which just consists of squeaks and squeals and snorts and whinnies. I need a little minimum of true music to fully appreciate a record, or - to put it differently - I don't understand musicless music, but that may come, that may come, with age, with more listening ... What German tuba-player Carl Ludwig Hübsch does on this record comes at times very close to the border of what I find bearable, yet on the other hand many of the parts which I call true music - and I know that's a very relative concept - are truly excellent. Hübsch, who composed all the material, is accompanied by some of the best improvising musicians on the German scene : Axel Dörner on trumpet, Frank Gratkowski on reeds and Michael Griener on drums and percussion. This music is composed, though, even if it is improvised. The structural basis of the music is at first listening far from being apparent, but as things evolve, the emergence of unisono lines and unclear rhythms which suddenly manifest themselves give surprising effects. The album starts with "NGC Hades B", a composition that is not only hardly audible, but which consists to a large extent of silence, with the occasional sound or sound clusters, creating solo or unisono monotonous waves that come and go, just to be replaced by silence again. The "Primordial Soup" in the title refers to the watery substance out of which life itself emerged some 3.8 billion years ago by loose chemicals starting to merge and become proteins. And the music surely imitates this process. The compositions are very abstract with notes jumping with high ranges over the scales, with lots of counterpoint melodies and odd rhythmic patterns, yet it all fits well. And the tracks are ordered in a nice way between pre-cambrian evocations and plain fun. For instance, on the sixth track "Pressio", you can close your eyes and indeed be transported back to a windy and watery expanse in which bizarre things are taking place below the surface, but then it's followed by a clearly composed tune "NGC 2270 Terrier", which has elements of brass band and early swing in it, with Hübsch's tuba providing the foundation for the other musicians to improvize, and at times even throwing them off balance, just to be brought back by the other musicians into the primordial soup and then slowly back into some really great subdued yet joyful unisono playing. But the next track "NGC 2776 Inspektion" brings you back underwater, in the soup, for a composition with as few notes as possible, creating images of a slowly bubbling oozy substance. The last track is joyous and sad at the same time, like the song of the whales. Really interesting music. Don't be judgmental when listening to it for the first time, be patient and listen again. This music has great depth, and what the musicians manage to create, not only by getting unknown sounds out of their instruments, but also by creating sound sculptures you've never heard before, is a great listening experience.
Stef on Thursday, September 27, 2007
Share

"I need a little minimum of true music to fully appreciate a record, or - to put it differently - I don't understand musicless music"

I agree with that and glad to see I'm not alone. In my opinion, music should not be aural torture...

Thanks for pointing that out.