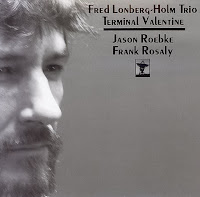 Originally, Fred Lonberg-Holm's concept for "Valentines For Fred Katz" in 2001 was to bring a tribute to his namesake and colleague cellist. The musical result of this cello-bass-drums trio was so appealing, that he made two more records in the series, first "Other Valentines" and now "Terminal Valentines", a title which suggests that it is also the last one. Lonberg-Holm is one of today's most important jazz cellists, and he recently replaced trombonist Jeb Bishop with the Vandermark 5. The music here is a combination of jazz, chamber music, avant-garde and even rock, and in contrast to the other two albums, all the compositions are by the trio. The second track for instance, "Maybe It's Too Late" demonstrates their talent to the full : dark and gloomy, with deeply emotional piercing tones and lots of space for improvization on a clearly set structure. Other pieces, such as "Three Note Song" and "And You Smile" are on the other end of the spectrum, with a more joyful melodic angle. The trio's major success lies in the perfect balance between abstraction and melody, structure and improvization, emotions and intellectual play. Yet the truth is also that the line-up has its limitations, and further exploitation of the concept could indeed be a little over the top.