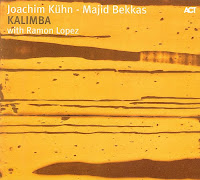 Joachim Kuhn, the German pianist, joins forces with Majid Bekkas, from Morroco, on guembri, vocals, oud, kalimba and percussion, and Ramon Lopez, from Spain, on drums. It's hard to explain, but the music does not sound as if various styles are combined, they fit rather nicely as a genre by itself, as if it was always meant to sound like this, with the hypnotic, bluesy, jazzy, sometimes even classical piano, playing great music with great rhythmic support and with the wonderful singing of Bekkas to lead us through the music on some of the tracks. Kuhn has of course had many other tries at world jazz, including last year's "Journey To The Center Of An Egg" with Rabih Abou-Khalil, on which the piano-oud-drums combination was first tried, and the album's success may have encouraged him to continue on that road. It has in any case lead him to a musical territory of real interest, one in which the music itself dominates, rather than the artificial mixing of genres. The music is joyful, meditative, sad, elegant, ... and very serene. A real treat.