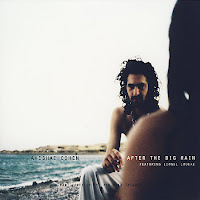 I first got to know Israeli trumpeter Avishai Cohen via The Lemon Juice Quartet's "Peasant Songs", an easy to recommend, beautiful record that combines jazz, klezmer and modern classical music. His first endeavours in the area of world jazz with two records with his "Third World Love" band, I found less successful. Now he has changed the concept a little bit, still with Omer Avital on bass and Daniel Freedman on drums, adding Lionel Loueke, from Benin, on guitar and vocals, Jason Lindner on keyboards and Yosvany Terry on chekere. The music is nice enough, very often reminding of Don Cherry's mid-seventies period, with muted trumpet, African rhythms spiced with Spanish and Middle-Eastern influences. This album would be the final part of a trilogy on "the big rain", but I could unfortunately not find any information on the other two albums. Cohen explains the title : "The big rain is like a flood, maybe the biblical big rain, but it can be many things. It's not meant to be tragic." As the lyric of "After the Big Rain" states: "The world is a river of hope/beauty is already here." The combination between Loueke and Cohen works quite well, and even if the electronically distorted trumpet sometimes moves too far into real fusion territory to my taste, the overall effect is still great. The music is all about rhythm and atmosphere, yet it also offers real substance, which will want you make to put it on again and again. Not all compositions are at the same high level, but that's a minor comment. All musicians are excellent.

Listen to
After The Big Rain
Meditation On Two Chords
Stef on Wednesday, September 26, 2007
Share

I'm familiar with the work of Avishai Cohen, the N.Y. double-bass player.

I was not aware of the trumpeter's existence. Listened to a few tunes. Loeuke is also a very gifted guitarist.

There are indeed two Avishai Cohen's.

And indeed Loueke is excellent.