In a bar last Sunday evening I heard a recent live recording by The Rolling Stones, playing I Can't Get No Satisfaction, wondering how it was possible that they stopped being creative somewhere in the early seventies, and then living on the heritage of those few years for the next thirty, and richly for that matter. By contrast, Ornette Coleman is in that sense a true artist, his search for new ways of expressing himself has been relentless over the years, re-inventing himself with each album, sucking in ideas from all over the musical environment, daring to come up with interesting line-ups in order to create new concepts. I saw him perform recently with three bass players (arco, pizzi and electric), and the sound he created was absolutely magnificent, and the fact that he ended with Lonely Woman, pleased me even more. And unlike The Stones, also this version was completely new. A great artist. The success of last year's Sound Grammar and the Grammy Award he received for it, may have triggered the release of some older tapes or re-issue some forgotten albums.

The Complete Live At The Hillcrest Club (Gambit Records, 2007) 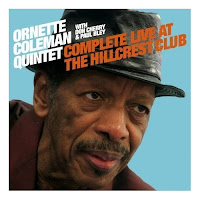 The first one dates from 1958, still very much a bop record, with Paul Bley on piano, Don Cherry on trumpet, Billy Higgins on drums and Charlie Haden on bass. The sound quality is not excellent, with the volume of drums and especially the piano being too low. Yet it's great to hear Paul Bley interact with what would become the famous piano-less quartet. Lots of energy and worthwhile for Coleman fans. 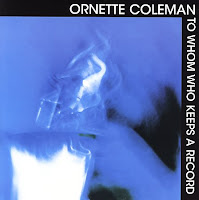 The second release was so far only released in Japan on vinyl, but now available on CD. The recordings date from 1959-1960, with Coleman, Cherry, Haden and either Higgins or Blackwell. The sound quality is excellent, the music too and of the same level of the historic albums made in that period. Utterly bizarre that it wasn't reissued earlier. 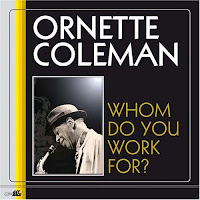 The third reissue is more recent, and was recorded live in 1971 in Berlin, with Coleman and Dewey Redman on sax, and with Haden and Blackwell. The double sax front is interesting, and I must say that it all too clearly demonstrates Redman's better mastery of the instrument, both in terms of melodic improvization and power. The highlight of the album is Haden's "Song For Ché". The earlier vinyl version of this record is called "European Concert".

So, Coleman fans, it's hard to say which one is best. All three are totally different and worthwhile at the same time.
Stef on Sunday, September 23, 2007
Share

To Whom Who Keeps a Record is included in its entirety on the Atlantic set Beauty is a Rare Thing. Great music, of course.

I've been staying away from Gambit releases as they seem yet another dodgy bootleg/grey-area company...