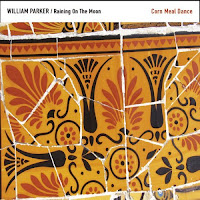 William Parker is among the greatest. He is among the greatest bass players, among the greatest musical adventurers, among the greatest artists, among the greatest art initiative originators, and probably among the greatest humans as well, if you can trust his poetry. His range of music is varied, ranging from his solo bass efforts to the musical exploration duos with Hamid Drake, his own regular quartet, the unbelievable free improv big band called the Little Huey Orchestra, and many more ... and then there is the Raining On The Moon Band, which is more "free mainstream vocal" jazz, with Leena Conquest stealing the show. The first record of this band is an absolutely highly recommended piece of music, with Leena Conquest singing on only three tracks. Here, she is in the spotlight, and Eri Yamamoto joins on piano. The other band members are the same : William Parker on bass, Rob Brown on alto saxophone, Lewis Barnes on trumpet and Hamid Drake on drums. The concept is also the same - Parker's political poetry sung with insistence and powerful rhythm, drenched in the blues tradition, but on the second album it is a little bit softer, less angry, more to the center of the spectrum, lighter, more song-like, gospel-like, more composed in the various meanings of the word. Yet the concept is so strong, the musicians so good, that I really don't care that it sounds like a CD 2 of the same album, rather than a new album in its own right (the last track "Gilmore's Hat" sounds like an replica of "Raining On The Moon"). Improving on the first one was impossible. This one is nice to hear too, but the adventure is gone.