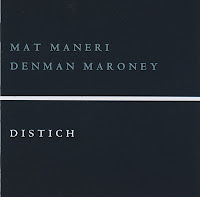 Mat Maneri is one of those musicians I really have come to like in the past years, starting with absolute dislike. The main reason for that was that I could not comprehend the atonal, microtonal and totally abstract compositions he made. But on many albums on which he plays his 5-string viola without being the leader, his role is more "inside" the music, yet that was apparently needed for me to come to appreciate him, as a a kind of bridge to his more bizarre and abstract tonal universe as a leader. On "Distich", he is accompanied by Denman Maroney, who plays hyperpiano, i.e. a normal piano on which he afflicts extended techniques, and definitely someone who feels equally at home in Maneri's universe. The music is subtle, sensitive, improvized on the spot, but very concentrated and focused. The two musicians find each other blindly, creating tension, beautiful images, dense chattering, strange and eery melodies, suddenly appearing and disappearing patterns, ... there is a lot to hear, yet it's all ungraspable as clouds, floating along, with its own logic, very coherent, very compelling. Those who are open to new musical experiences should certainly listen to this one. Let yourself be sucked into their universe and enjoy.

As Denman Maroney puts it : "To this end I often compose and improvise in pulse fields. A pulse field is a polyperiodic texture comprising two or more pulses of different speeds. A pulse field is polyrhythmic, but unlike most polyrhythms it is relative and egalitarian not absolute and hierarchical. The idea is to create spaces of relative time where a given pulse makes more sense in relation to others than in itself."

... understood? Don't worry about the explanations, just let the music take you along.
Stef on Wednesday, October 24, 2007
Share