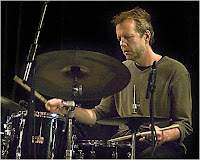 When I review the list of my reviews from this year, there are clearly a few constants, but none so striking as the presence of Tom Rainey at the drumkit, and that is a coincidence in the sense that I never looked for CDs on which he played (unlike CDs with for instance Hamid Drake), yet it's also not a coincidence in the sense that the major jazz musicians of today seek the services of this excellent and very versatile drummer.

Some of this year's best CDs on which Tom Rainey performs :

The most staggering thing when you look at this list is the wide variety of styles he is playing, and without a doubt he is a major contributor to the success of each of these CDs. It also demonstrates his attitude - in full service of the music at hand. And it also demonstrates the fact that he combines the technical skills of all these styles together with sufficient musical understanding and creativity to make it a success.

Unfortunately I couldn't find sufficient samples to illustrate the major differences of approach and the quality of his drumming in each and every style he's touched upon in the past years, and that's too bad. It only demonstrates that good music still is hard to find, even on internet.