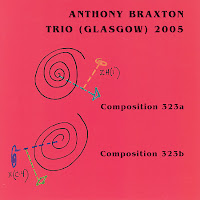 The trio consists of Anthony Braxton on alto saxophone and electronics, Taylor Ho Bynum on cornet, flugelhorn and trombone, and Tom Crean on guitar. This double-CD set consists of two tracks, one on each disc, called "Composition 323a" and "Composition 323b". The first clocks at over 110 minutes, the second over 90. To me, Braxton has always kept the very subtle balance between a cerebral approach and human feelings. The latter seep through at times, but the main focus is on the form of the music, the exploration of the interaction of sounds and the search for new approaches to music-making, rather than on the expression of emotions. In that sense, he is often closer to free improv than to free jazz, more European than American. But whatever he does, he is always genuine in his approach and each record he releases offers a worthwhile listening experience. The music here consists of sound musings between three instruments, alto, trumpet and guitar, the latter always muted, more percussive than melodic, more rhythmic than harmonic. The trumpet too is muted, and the sax doesn't shout either. They converse, they dialogue, they challenge each other, in short bursts of notes, at times not leaving each other any space to manoeuvre in, at times leaving all options open. No melodies emerge, no patterns are given for reference ... And it is an interesting listening experience, with lots of subtleties and shifts of intensity, but you need to take your time. And who can concentrate on such long pieces, who can listen without interruption to two pieces lasting longer than one hour? There is only one solution : put it on in your car, leave your cell phone where it was, and drive for a couple of hours (but don't close your eyes).

Listen to Composition 323a

Album can be downloaded via Lulu.com
Stef on Friday, November 30, 2007
Share