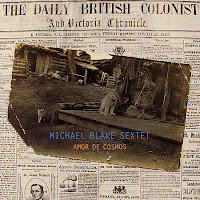 I think Michael Blake is one of modern jazz finest composers, because he combines a lightness of approach with complex compositions and arrangements. His music is there just for the sake of the music, without any intellectual or snobbish pretence, a little bit in the same league as Wayne Horvitz, only different. Both are also comparable in the sense that they can as easily refer back to tradition (blues, americana, ...) as test the boundaries of avant-garde and even further. Next to making great compositions, Blake is also an excellent, warm-toned saxophonist, who learned his trade with the Lounge Lizards in the 80s, and who has made an interesting series of albums, of which his "Kingdom Of Champa" with fellow "lizards" is the one I listened to the most over the years, but "Elevated", "Drift" and "Blake Tartare" are also of interest. This album is inspired by the life of 19th century British Columbia newspaperman and politician William Alexander Smith, who renamed himself Amor de Cosmos. For the album, his line-up consists of fellow Canadians : Brad Turner on trumpet, Sal Ferreras on marimba and percussion, Chris Gestrin on keyboards, Andre Lachance on bass and Dylan van der Schyff on drums. This is modern creative jazz at its best : warm, eclectic, rich, accessible, creative, full of musical surprises and variation. The best piece of the album is the longest track "So Long Seymour", because it shifts in nature every few minutes, with elements of bop, free, avant-garde, traditional, offering the musicians the opportunity to expand within the given compositional framework. Nice!

Pay us a visit at:
http://freemusic.podomatic.com