Dave Douglas's reference to my humble blog in his own blog diary some days ago, is an open invitation to write some reviews about his recent records. And truth be told, Douglas has had a major influence on my renewed interest in jazz many years ago, when Masada and the Tiny Bell Trio caught my interest. In case information is needed about him : he is a technically brilliant musician, and a musical adventurer anchored in tradition. He has explored many aspects of jazz, from klezmer, balkan, chamber jazz, free and avant-garde to more modern projects with electronics, fusion and even funk inclinations, or recently the jazzy cinematic pieces for old silent movies. 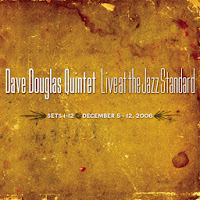 For starters, after Ken Vandermark published his 12 CD live set "Live At Alchemia", Dave Douglas does the same with Live At The Jazz Standard. This downloadable set consists of concerts given at The Jazz Standard between December 5 and December 10, 2006. My experience from Vandermark's Alchemia is that such abundance is hard to digest, and after a while it becomes absolutely impossible to compare the performances because it all gets confused in a head such as mine (limited space, limited memory, no ordening system). So, all that just to tell you that I did not download them and that I did not listen to all these performances. Luckily, there is now also a 2 disc version, which is also available as a separate album, as well as downloadable on Douglas's website. 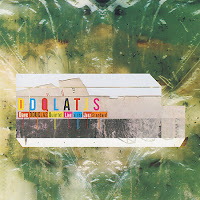 Then the music : it is absolutely excellent : Douglas limits himself to cornet, with Donny McCaslin on tenor, Uri Caine on Fender Rhodes piano, James Genus on double bass, and Clarence Penn on drums. The album contains the best (I hope) from the longer version, and the music is either new, or from the recent studio records "The Infinite", "Strange Liberation" and "Meaning & Mystery". The band plays in Douglas's typical restrained way, never indulging in raw emotional outbursts, yet never becoming too cerebral either, with compositions and improvizations taking a central place. It's all about music and musicianship and without a doubt one of the best live albums of the year. 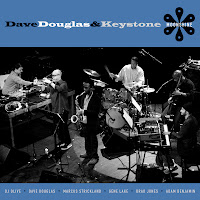 On "Moonshine", the music is radically different, partly due to the presence of DJ Olive on turntable and laptop, but also because the concept is different. If the above live dates are fresh and direct, this one is more processed, with fluffy creamy layers in between the jazzy compositions, with and acid icing on the cake. The album is inspired by the Buston Keaton/Fatty Arbuckle comedy with the same name, but the music does not have the functional objective of supporting the images, as the live piano did in those days. Rather, the music tries to capture the overall mood of both characters and plot. With Dave Douglas on trumpet, Marcus Strickland on saxophone, Adam Benjamin on fender rhodes, Brad Jones on ampeg baby bass, Gene Lake on drums, and as mentioned, DJ Olive on turntables and laptop. It's hard to give a preference, but I think I would go for "Moonshine", if only for the more adventurous approach and musical surprises. And with "Tough", it brings the funkiest piece since "Mad Dog" on "Sanctuary". Great!

Both albums are absolutely great for any lover of modern jazz.

You can donwload Moonshine here.

Huzzah! Dave Douglas puts out some good stuff, even on *gasp* CD format (bleh to the new fangled mp3). with that being said, I did download the 12-set of downloads back in Dec 2006. Great stuff... and removing the dupes in an iPod playlist, it's roughly **7 hours** of great material.

I hope he does something similar with his Village Vanguard Dec 2007 stint; but then again, I'm a sucker for Dave Douglas' music.

I got Moonshine sometime last week. Spun it again today on the way to Thanksgiving dinner. The CD's on the way, and I like it how he offered up the mp3s immediately for free for the CD buyer. Classy.