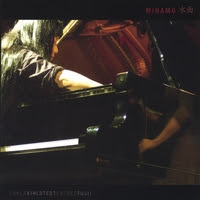 This is the sixth album with Satoko Fujii on my review list this year, and the second by Carla Kihlstedt. Both are classically trained musicians, who moved to jazz and avant-garde while completing their studies. Kihlstedt furthermore has co-founded several bands, Sleepytime Gorilla Museum (rock), Tin Hat Trio (folk-jazz), Charming Hostess (world), Two Foot Yard (avant-folk). This album captures two live performances of free improvization in San Francisco in 2002 and Wels, Austria, in 2005. And what can you expect from two such musicians? Indeed, they manage to create four pieces of magnificent and captivating interplay. It is amazing how Fujii manages to play patterns while still keeping the music sufficiently open to keep all new options possible. The first track starts with some pizzicato violin, with Fujii plucking her strings and playing the keys, first tentatively, then both start finding a rhyhtm and pattern, which is only there to be further expanded upon : break it down again, build in silence, join the parts and let the violin improvize over it, creating a new melody, sustained by dark and menacing piano. The second track is much longer, much more open and their true virtuosity comes to the fore in the creation of shifting passages of varied intensity and pitch, with slow emotional weeping moments by the violin, brilliantly echoed by the piano. The music is abstract, in the sense that nothing has been prepared, yet the whole is focused, creating its own logic, order and structure as it moves on, changing from jazzy moments to avant-garde excursions with lots of extended techniques, but ending a more romantic mood. This is music of suprise, emotional interaction and abstract gentleness. The third, shortest track, brings a speedy dissonant but perfectly aligned interaction between the two artists, challenging each other to the extreme. The last track shows the calm maturity of both musicians, in the sense that they allow silence to be one of the main components to start with, playing almost uninvasively, elegantly letting the notes of the two instruments touch each other in mid-air, hesitantly, backing off and repeating the move again, and again, but each time from another angle, with different approaches. Gradually, the empty space is filled completely with a more intense and ongoing interplay with many repetitive chords, but changing attacks, now gentle, then powerful, moving the music into a paroxysm halfway, only to shift the music back to lighter, yet eery tonal explorations. This music will not appeal to all jazz fans, because it isn't jazz, but it's great music.


Listen and download/order from CDBaby
Stef on Wednesday, November 28, 2007
Share

It does appeal to me and is definitely one of my favorites this year. A great record from a label to keep under the radar.