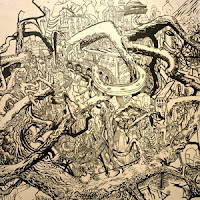 My son forced me to listen to some rock music he liked, saying it was close to the free jazz I listen to. Truth be told, it was less close than he expected, but while jointly browsing the internet, we came across Helena Espvall, a Swedish guitarist and cello-player, who moved to Philadelphia in the year 2000. She currently plays with the psych-rock band Espers. But she also released a solo album "Nimis & Arx", which incorporates cello, guitar and electronics. It's not jazz, it's not really free improv either, but the musical tonality and freedom are pretty close. In terms of technical and instrumental skills, she is not in the same league as other female cello players as for instance Maya Beiser, Jane Scarpantoni or Peggy Lee, yet her music is quite interesting, mixing ambient with prog rock and free improv. Some of the pieces she plays here, with lots of overdubs, are really strong. Technical skills are the basis, musical vision is the essence. And she clearly excells in the latter. With a little more experience, she may become an artist of real importance. Clearly someone to follow (and to encourage).