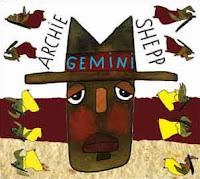 It's hard for a legend to keep producing stuff that adds nothing to what has already been done by him before, or by many others for that matter. This double-disc is called "Gemini" for the only good reason that it contains two approaches which are not even kin. The first is a studio set, with some blues, some rap, some gospel, the whole spiel. Music you already forget while listening to it. The second CD is something entirely different, with a live performance in Souillac, France, at a jazz festival in 2002. This band features Amina Claudine Myers on piano, Cameron Brown on bass and Ronnie Burrage on drums. It is a nice free bop outing, and only for Shepp's great sax still worthwhile. But don't expect to hear any free jazz anymore. These times are long gone. Gospel yes, on the second track, with Amina Claudine Myers and Shepp singing. I recently listened to Shepp's live performances in Montreux in the early 70s. There is no comparison possible. While Ornette Coleman is still going strong and innovating, Shepp seems satisfied to rely on his bop comfort zone, adding some rappers to sound modern. But I'm afraid this is all pure entertainment and commercial tactics, and even if the label sells, we hardly get anything in return. The two stars are still for some nice moments on the live CD.

Thanks Stef for the information on this Archie Shepp set

Revolution is excellent
10 minutes from a master putting a lifetime of experience into a powerful piece, sax and vocal
Heard this last night at Ronnie Scotts London