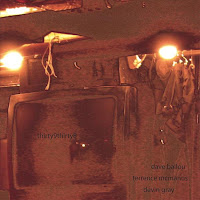 An interesting album : three tracks, called "eight30four", "nine40two", "twenty1nineteen", the sum of which is "Thirty9thirty8", or the exact length of the record. It kicks off with heavy industrial guitar noise by Terrence McManus, out of which emerges a plaintive melodic unaccompanied trumpet solo by Dave Ballou, and then Devin Gray's drums come in, the musicians alternate throughout the piece, only acting as a trio at the very end. The second track is more dissonant, bringing high intervallic improvizations, with short bursts and speedy interaction, acting as a kind of opposite to the first track. The third track is more open, starting with guitar and trumpet reacting, echoing and expanding on each other's inventiveness, creative and beautiful, with Gray joining after exactly one third of the track. McManus does not really solo in the typical sense, he plays chords throughout, on three strings or more, arpeggios or strumming, and rarely on one string. Ballou's trumpet-playing is excellent, as we already knew, inventive, open, complex, without needing to resort to extended techniques to bring something new, and melodic all the way through. Gray's drumming is great and functional. A real trio album, with a fresh and interesting approach.

I downloaded it via payplay.com, but that's apparently no longer possible. But it's still available from CDBaby.com.
Stef on Sunday, December 02, 2007
Share

Hi-
Thanks for the review.
What is your full name and the website that should be credited with the review?
Also, can you please correct the spelling of the title of the review?
Terrence McManus, and Devin Gray.
Thanks,
Terry

Terry, sorry for the typo.

My name is just Stef.

... or just call it "Free Jazz" with the url underneath.