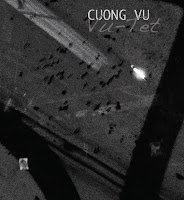 Cuong Vu is a young trumpeter with a clear musical vision. His integration of rock-influenced rhythms and melodies with a jazz line-up and electronic transformations leads us indeed into new territory. It's not jazz, it's not fusion, it's not rock. On Vu-Tet he is joined by his regular band members Ted Poor on drums and Stomu Takeishi on electric bass, but also by Chris Speed on sax and clarinet. The music is at times very close to Speed's musical approach without the "Balkan" influences, or not too far away from Jim Black's albums either, with long melodic unisono lines between trumpet and sax, supported by a hard-hitting pumping rhythm section, which is capable of complex rhythm changes and high speed deliveries. It's all very well done, nicely orchestrated, yet to my taste a little too polished, which goes at the expense of the spontaneity you expect from jazz. Especially the slower pieces could have had some more roughness, some claws, more emotional outbursts. After the "spacy" intro, the album really starts with some magnificent musical agitation on "Accelerated Thoughts", which really demonstrates the capabilities of the four musicians and of Vu as a composer, it moves over some slower pieces to the real highlight of the album "Never, Ever, Ever", wich will certainly appeal to fusion fans, but then it dwindles down to soft, even mellow melodies in the last two tracks, all nice and beautiful. Cuong Vu should maybe listen closely to Tomasz Stanko - his sense of melancholy leads him to create nice and beautiful melodies too, yet Stanko always manages to get some superior deeply-felt raw emotions in his music. Stanko lays himself bare, naked and vulnerable, and that's probably the toughest challenge in music. If Vu can take this hurdle, he can become really great, because he has loads of talent (or maybe he should just stop playing with Pat Metheny).

His CD with all the extras can be downloaded since December 17 from Artistshare.

The Artistshare website is certainly one to check out. The concept is that the musicians directly release their music through the site, offering even possibilities for interaction during the creative process. Apart from the music itself, you get sheet music, commentary by the musicians on the music they create, e-mail exchange and other insights.
Stef on Wednesday, December 19, 2007
Share