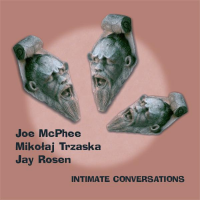 Mikolaj Trzaska is, together with Adam Pieronczyk, without a doubt the best of modern Polish or even European saxophonists. I called him earlier the opposite of Peter Brötzmann, in the sense that his tone is warm and elegant, and that he does not need to shout or scream in order to be adventurous or move boundaries. And his style of playing comes close to the efforts made by Joe McPhee in the previous years, in whose tone anger has been gradually replaced by compassion, though not completely. It's no surprise they met and played together, assisted by the great Jay Rosen on drums. "Intimate Conversations", the title of the album, is well-chosen, because that's exactly what this CD brings. The first two tracks are duets between McPhee and Rosen, fierce, anguished, powerful. On the third track the tone melts down to more melancholy regions for a duet between McPhee and Trzaska. On "Did God Forget About Darfur/What God?" the first trio track can be heard. While McPhee sticks to his tenor on the whole album, Trzaska alternates between alto, bass clarinet and the rarely used C-melody sax. That difference makes it easier to identify the musicians, although their differences in style are easily recognized. The interaction, the common language they find, the call-and-response, are all excellent, especially in "Intimate Conversation # 2" on which they move to the higher registers of the instruments, playing very controlled and shrill tones, like birds. Jay Rosen brings a solo drums tribute piece to Max Roach, called "North Star" and although I'm not a real fan of drum solos, this one is captivating, with some one-handed drum rolls, played with power and subtlety as Roach did himself. The most intimate conversation is the third one, on which Trzaska brings some rhythmic and hypnotic circular breathing on bass clarinet throughout the track, over which McPhee plays some eery light lines, sparsely accompanied by Rosen, moving into a more intense blaze in the middle, yet falling back in their initial routine at the end : a bizarre and impactful piece of music. One of the greatest feats of the album is the space the musicians offer each other, creating great openness. The best example of this can be found in "Snowflakes on flowers", on which the music expresses exactly that, with all the trembling lightness and softness of touch it entails, including a little over 15 seconds when nothing can be heard at all. A great, explorative and sensitive album.