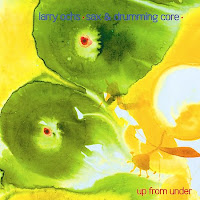 In order to improve his diction (clear, loud, persuasive ...), the ancient Greek orator Demosthenes used to walk down to the beach, then put some pebbles in his mouth, and with this impediment he started perorating against the roar of the crashing waves, just to make sure that the expressiveness and force of his speech could overpower the limits of the human body and the worst of natural obstacles. This is the image that comes to mind with saxophonist Larry Ochs's playing with (or against) two drummers, especially on the first track. Both drummers, Scott Amendola and Donald Robinson, hit as hard as they can (yet intelligently) and Ochs's tenor roars up against the storm. The sheer power coming out of this is hard to describe and the overall effect is gigantic, especially because of Ochs's skill at overpowering the drums and taming them with melody and emotional expression, despite the drums' unrelenting unleashing of all the energy they can muster. The title track alone is worth the price of the album. But then on the second track, the trio shifts gears, and moves into a very sensitive piece, with soft drumming, middle-eastern melodic explorations by an almost hoarse and painfully emotional sax. The structure is the same as on "The Neon Truth", the previous CD by the same band, on which all pieces start with free improv, then the drums join until the trio finds its basis, then the two drums move on without the sax, and at the end they all come back together, wherever that is. The band's original intention, ie to reflect the traditional blues-shouters in an instrumental form, is best illustrated by the third track, in which sax and both drummers are engaged in a fierce conversation, with immediate call-and-response. The variation on this record is great, soft pieces and fierce moments alternate, with "And Nothing But" offering probably one of the most beautiful free sax moments of the year, starting slowly but then gaining momentum ending again in a great finale. Yet it's not all powerplay or sweet emotions, there are some joyous moments, moments of great interaction, just for the joy of making music together, and the two drums really do some great things together, rolling and thundering at times, subtle and sensitive at others. An album with a high level of "woohaa", bringing everything great music should offer : true emotions, adventure, variation, interplay, tension, surprise and entertainment. From the "Out Trios" series at Atavistic, this is definitely the best one.