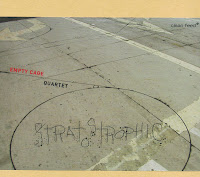 The Empty Cage Quartet moved back into the studio for a great record, and a much better one than last year's "Hello The Damage", and this for a variety of reasons. First of all, the sound quality is excellent, with all four instruments coming across perfectly and well-balanced. Secondly, the band brings brings more variation thanks to eleven tracks that - though not all of the same level - are all sufficiently coherent in their approach to give the album a strong sense of unity. Jason Mears plays alto sax and clarinet, Kris Tiner trumpet and flugelhorn, Paul Kikuchi drums, percussion and electronics, and Ivan Johnson double bass. This is an original Ornette Coleman line-up and the music is surely indebted to him, but even more to bands as Other Dimensions In Music, or Wadada Leo Smith, daring to take the time to improvize on a thin rope above empty space, but with sufficient instrumental skills and perfectly attuned to each other to keep the high quality of interaction going, without tumbling down into the void. Some tracks are fun, others are soulful and beautiful free explorations with lots of contrapuntal interplay by the horns, as on "Through The Doorways Of Escape Come The Footsteps Of Capture". This title itself tells you something about the band : the music is serious but the musicians don't take themselves too serious. Some tracks are hard bop with a rhythmic head, improv and back to theme, such as "Old Ladies", on which all four musicians show their reverence for their musical tradition. But they go even further : "Steps of The Ordinarily Unordinary" sounds almost like medieval European court music. "The Power Of The Great" is dark and brooding. Variety indeed. The great thing about these young musicians is that they stayed and played together for many years and that really pays off. The way they interact on every track is a pleasure to hear, even at the most intricate moments, as in the first track "Again A Gun Again A Gun Again A Gun" - and the repititiveness of the title is also to be found in the music, with all the rhythmic subtleties you may want. They end the album with the 17-minute long climax "Don't Hesitate To Change Your Mind", which illustrates again the band's strengths : a great sense of focused freedom, a great sense of rhythm and interplay, and so soulful and emotional throughout. This is without a doubt their best album so far, and with the upward curve they're in, we can expect even more fireworks and intensity in the future.

One recommendation though for the band : delete these low quality videos from youtube - they don't do credit to the band's music, quite the contrary even.