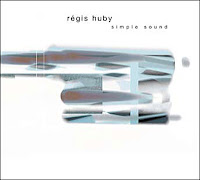 This is a hard to pigenhole record, blending chamber jazz, avant-garde jazz with modern classical music with at times European folk ingredients. The band consists of Régis Huby on violin, Alain Grange on cello, Bruno Chevillon on bass, Olivier Benoit on electric guitar, Catherine Delaunay on clarinet and Roland Pinsard on bass clarinet. Every piece is completely composed, with lots of contrapuntual and often sophisticated arrangements for the strings, full of rhythm and tempo changes, yet offering freedom for the soloists to improvise. In his compositions, Huby is a master in creating tension and release : repetitive figures, often reminiscent of Steve Reich, played in unisono with lots of dramatic power are reacted upon by the other instruments in the same vein, driving the composition to moments of climax, yet never exploding but changing unexpectedly into slow and sweet melodic interplay and than back into an overdrive forward movement. The contrast between the strings and the rawness of the electric guitar or the bass clarinet is strong, giving the music extra power and depth. The musicians are absolutely stellar, and their genre-blending skills are amazing, moving from one to the other while maintaining a high quality performance in each. The music too shifts from one mood and mode to the other : accessible with claws, sweet with a angry attitude, reverent and iconoclastic, hypnotic and refreshing, serious yet light. A musical adventure. Fans of John Zorn's string ensemble or of Bang On A Can will love this.

Listen and download from eMusic or iTunes (both sources mention that the album was first released in 1999, but that is wrong : it was recorded between September 2005 and March 2006, and released in October 2007, according to the CD cover).
Stef on Thursday, February 28, 2008
Share