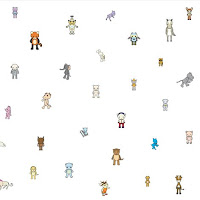 "The Dreamers" is a kind of successor to "The Gift", John Zorn's pleasantly dark mixture of surf music with jazz and modern electronics. This menacing gloomy atmosphere is kept here, despite the fun late 50s/early 60s melodies, especially on the long "Anulikwutsayl", on which Marc Ribot again demonstrates his skill at finding the right tone between bluesy guitar shredding while going outside the blues scale to add effect, supported by dark whispers and high female screams. The same ambiguity of gentleness and horror was a little more present on the previous release (the reason why it's called "The Gift" is because Zorn had to wrap the CD in an additional cover because of the sick art work of Trevor Brown) than on this one, but the style and musical approach is generally the same. Other band members include Jamie Saft on organ, Trevor Dunn on bass, Joey Barron on drums, Cyro Baptista on percussion and Kenny Wollesen on vibes, and of course Zorn himself on sax. The music is fully composed, with quite some attention to the final editing in the studio, and incorporates all Zorn's usual styles : rock, klezmer, cinematic elements (Morricone), jazz, latin, and of course surf music. Ribot and Wollesen are the lead voices here, and the rhythm section is unbelievable in its variety, forward motion and repetitive lines. It is fun. It is dark.

One warning : I downloaded my copy via iTunes and the album is incomplete : the last three tracks are missing. I only found out after I purchased it. So it's probably better to order elsewhere.