Irish guitarist Mark O'Leary has been quite productive lately, with an excellent CD last year on Clean Feed, with a double trumpet front line, some guitar trio outings, but always looking further for new combinations, and alternatives to what he has already created. Standing still or repeating the same is not part of his attitude apparently. Therefore each new album is a surprise, which you may like or not, but you have to grant it to him, there aren't many musicians with the courage to re-think themselves with each record, and hence keep pushing themselves to new boundaries. And regardless of his exploratory drive, somehow the music is still accessible in a way.

On "Zemlya" we find him this time with American violinist Eyvind Kang and Canadian drummer Dylan Van Der Schyff. I assume that the "Zemlya" in the title refers to Nova Zembla, the nordic archipelago of Russia, yet it also means "Planet" in Russian. Like "On The Shore", the band's music is at times very evocative of natural landscapes, including the sounds of seagulls or whales, generated through the many manipulative possibilities of guitar and violin and drums, aided by laptop and electronics. O'Leary clearly takes the lead on the album, often sounding like Terje Rypdal, trying to bring icy soundscapes, but much more nervous and less sentimental than the Norwegian guitarist. His guitar phrases are edgy, abstract, full of short bursts of note sequences, often alternated by long wails. Kang plays a lot of pizzi, often recorded very close, giving an almost intimate feel to the violin at times, with the guitar and the drums in a more distant background, but the musical effect of electric guitar and violin are at best when they move into long wails, acting in counterpoint and echo. All three musicians move between extremely busy musical soundscapes to more sparse evocations, without any clear melodic or rhythmic lines, but with absolute relentless energy and drive. There isn't much warmth to be found here. Lots of harshness and hardness. Lots of intense moving about. The very limited comments on the Leo website that this album is amongst others influenced by Korean court music. I'm not too sure what that sounds like, nor how to identify it on this album. I assume it's the last track but I'm not too sure. That there are many influences working at the same time is clear enough. In any event, there is a clear structure and build-up of approaches on the album, evolving from the sound of nature, a fusion-like part, then electronics, over avant-garde chamber, more electronics, more fusion, ending in the warm welcoming gentleness of the last track, which sounds like coming home after a night in the blizzard. A great listening experience. 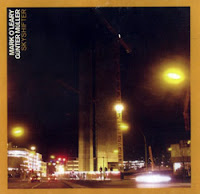 On Skyshifter, O'Leary and percussionist Günther Müller make a totally different kind of music. Any reference to jazz is hard to find. From the very first notes to the last, there are layers of electronic drones in varying colors and intensity, sometimes dark, sometimes shrill, once in a while interspersed with repetitive percussive rhythms. This kind of music is totally alien to me. I do not understand it. I cannot evaluate it.
Stef on Wednesday, April 09, 2008
Share