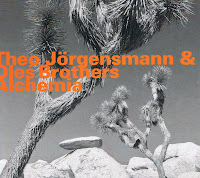 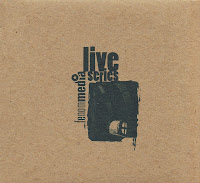 Listen to
Menace
Buy from Fennomedia.

German clarinetist Theo Jörgensmann issued two CDs before with the Polish Oles brothers, "Minitatures" and "Direction", both of which are excellent. To up the ante, the trio now released two live CDs, with some of the material coming from these studio recordings, and they are as good, no less could be expected from them. On both CDs Jörgensmann plays the basset clarinet, which allows for the playing of additional notes in the lower range. One CD was recorded at the now becoming famous Alchemia club in Krakow, Poland, in May 2006, and the other one in Poznan, Poland in March 2006. One might question the value of two live CDs with the same band, recorded in such a short time frame and with overlapping material : "Perrata", "Giuffree", "Menace", pieces accounting for half the length of both records, but since the 12 CD release of the Vandermark 5 at Alchemia, this kind of questions has become irrelevant, because the performance is what counts, on an equal level with the material, and believe me, both CDs are really worth listening to. And there are differences : "Menace" clocks in at 19 minutes on the Alchemia performance, while only at nine minutes in Poznan, just to demonstrate that the trio plays as the moment tells them to. Jörgensmann's playing is abstract but fluid, melodic and soulful, free and anchored in the tradition. He can play deliriously long high speed phrases, but also enjoy slow, bluesy and yearning moments as on "Giuffree", his hommage to Jimmy Giuffre, one of the icons of the jazz clarinet. And the Oles brothers? Well, what can I say more than what I wrote before? They are one of the best rhythm sections around : sensitive, innovative, intrinsically musical and free. One a treat for the ear, the other a pleasure to hear, and vice versa. If I had to choose one of the two albums, I would go for the Fennomedia release, because of the absolutely impeccable sound quality, giving the live performance an even more direct feel, as if you are part of the audience.
Stef on Thursday, April 03, 2008
Share