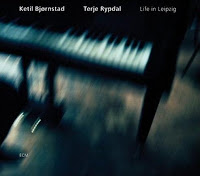 Two Norwegians with long-standing reference on the ECM label play a live album, recorded in Leipzig, Germany. Björnstad on piano, Rypdal on guitar. Two musicians that are not alike at all in style, yet very close in mood. Björnstad is classically trained, and plays in a rich romantic, impressionistic style. Rypdal comes from a rock background, and has hence a much more direct approach, not hindred by a broad guitar technique. But technique is one thing, playing music and making music is something else, and both are absolute masters at that, Rypdal even more than Björnstad, I think. But in essence, both are romantics, and it's not surprising that they meet in a jazz environment. Despite their difference in approach and style, they meet each other in perfect harmony of mood and musical vision. Rypdal's typical distorted high-toned full chamber full reverb guitar sound clashes with the piano's unadultered sound, but only initially. Once you get used to the combination, it works. It is clear that Björnstad has the lead, setting out the themes of the songs, with Rypdal reacting in counterpoint, or giving harmonic depth to the melody, or expanding it in wild improvisations. "The Sea II" demonstrates the full range of what these musicians can offer : emotional power, sentimental and musical explorations without becoming cheap, playing music that is as much Debussy as it is Pink Floyd or jazz. On the last-but-one track Rypdal takes the lead from Björnstad, creating a dark multilayered guitar synth environment full of echo and feedback, as a lead-in to the grand finale, which is jubilant, joyful and as expansive as you might hope for. I once was a fervent fan of Rypdal (especially for his "Odissey" (vinyl version) or his trio with Miroslav Vitous and Jack DeJohnette, both on ECM and highly recommended), but lost interest once he became too mellow and déjà-vu. But this one is great. Melodic, intimate and expansive, and the audacious confrontation between the soft and subtle piano with the sustained wailing guitar works well, works very well.