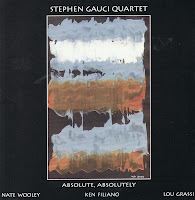 This is the second CD by the Stephen Gauci Quartet, with the leader on sax, Nate Wooley on trumpet, Ken Filiano on bass and Lou Grassi on drums, and it is actually the second release of the same recording session which led to the earlier "Wisps Of An Unknown Face" (CIMP, 2005). Apparently Gauci had more material than fit onto a single CD, and it's amazing how prolific he is, especially because he only started recording after he turned 35. I was already very enthusiastic about his CDs released last year. And again, this one is great too. It balances between free jazz and free bop, with great themes and long improvisations, but as Gauci's own liner notes describe it :

"Inside, Outside
Free, not free
Who cares? ...
As long as the source is pure.
Absolute, absolutely"

And the source is pure indeed. This is rhythmic, inspired, expansive, melodic, emotional, controlled and free music, with four musicians in top form, clearly enjoying the gig, but in a very concentrated an focused manner. It is really hard to believe that the material on this CD came as second choice from the performance. It is so full of creative ideas, warmth, sensitivity, soul and musical freedom, that it's a real treat from beginning to end. Gauci's sax sound is one of the most appealing at the moment, capable of many shades of human emotion, with a warm, round sound. The other musicians are also excellent : Filiano and Grassi I already compimented enough in earlier reviews, but Wooley is a different ball game. I never understood that someone with his technical and emotional skills could move so much into avant-garde meaningless sounds (but what does that mean?), but when he's part of a band like this one, he really demonstrates his skills, without relinquishing is natural drive for sound exploration, but it's harnessed, and hence also coming to fruition. An excellent album.
Stef on Wednesday, April 30, 2008
Share

"I never understood that someone with his technical and emotional skills could move so much into avant-garde meaningless sounds (but what does that mean?)"

This is a silly comment. You should have stopped after the first three words, you don't understand but don't jump to the conclusion that therefore what he's doing is meaningless. He's creating a new vocabulary on the instrument, he's stretching the instrument's sonic capabilities. The blog is called Free Jazz, I would hope these kind of knee jerk dismissals would not be found here.