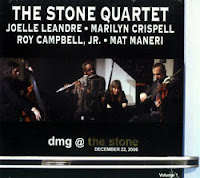 In December 2006, French bass-player Joelle Léandre had planned a series of duos at The Stone with Marilyn Crispell on piano, with Roy Campbell, Jr. on trumpet and with Mat Maneri on viola & violin. However, as it turned out, the four musicians ended up improvising together for the whole set, in various combinations. The four musicians had each of them already played together beforehand in one or the other line-up (Campbell with Maneri, Maneri with Léandre, Léandre with Crispell), and they feel like like-minded spirits on this free and open album, full of slow and intimistic harmonic confrontations between their four instruments. The slowness of their hesitatingly exploring of and expanding on the created sounds gives a rather accessible listen, with hauntingly beautiful parts in it, especially in the long opening track. The short samples which you can hear below will not really do credit to the carefully built up evolution of the pieces. The second piece, the first duet on the album, starts with Maneri's viola and Léandre's bass, the latter first pizzi, then joining on arco for a great bowed strings interaction, coming together in the same tonal regions and then moving away again to the extremes of both instruments' scope, while keeping the unique musical dialogue going. The third track is also a duet, with Campbell's wonderful trumpet-playing accompanied by Crispell, whose responsive ideas on piano are as close as you can get to the trumpeter's improv, including the almost simultaneous mood change close to the middle of the piece, or the sudden excitement of joint fluttering sounds later on, but when she starts taking the initiative, Campbell follows suit in a manner that is equally close, as if it was all written down and duly rehearsed. The fourth piece starts with Maneri's familiar microtonal viola sounds, that create an eery sound universe which the other musicians enjoy exploring with him. The notes are sparse, the atmosphere haunting and dark, the interaction brilliant. Half-way the track Léandre increases the tempo a notch, with Crispell accepting the invitation, the two men receding into the background, for a great many-faceted duet, for which, once the scene has been set, Maneri adds his ideas, and when Crispell changes the tone with a playful piano tune, Campbell jumps in again, expanding on the melody, with the whole band reacting to Léandre's bass vamp, and then Campbell slowly leading the piece to its end, with melancholy solo trumpet. I love it!

We would appreciate it if you took down the free download of the cd we put out and that is still readily available.
We understand what you are trying to do, but we wish that you would support us in other ways.
Thanks!
-the crew at Downtown Music Gallery

Bizarre reaction : I'm sharing a few samples (from Jazzloft), promoting a record that you release, giving it the highest quote, and you ask me to take down two 15 second samples?

If anyone is supporting you, I think it's me. What more do you want?

How on earth will you ever be able to sell a record if you don't allow potential listeners to get an idea about the music that you're selling.

I do not think that sharing two 15 second samples is going to keep listeners away.

Please let me know how to promote your music in more clever ways, rather than restricting publicity.

I got this reaction back from DMG management :

Someone who was not authorized [nor it seems intelligent] sent a message and wrongly represented himself as speaking for DMG.
[notice he did not sign his/her name]

I investigated your site when a customer alerted us to possible download violations and found that, just the opposite, there were only samples, and a nice review.

Myself and my partner Bruce were very pleased and thankful for your efforts,

and are upset that you were put off by someone - possibly working here - who should have checked more thoroughly - and with us - before putting foot in mouth!

You're supposed to be supporting music!

Don't you have anything better to do than worry about a couple of music samples? One thing you could do is lower the prices in your over priced store.