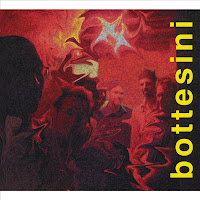 Now, this is a tough one to review. On the one hand the music is relatively simple, both rhythmically as in its structure and expansion, until you find out that the whole thing was improvised on the spot, and that means that you need great musicians to perform at this kind of level, especially in a live setting. So, on the other hand, the band consist of great musicians, especially Ron Miles on trumpet, Jeff Parker on guitar and Scott Amendola on drums, acting as guests on "The Bottesini Project", an initiative by saxophonist Paul Riola, with DJ Olive on turntables and laptop, Glenn Taylor on pedal steel guitar and Doug Anderson on bass. It's not because it sounds rehearsed while being improv, that it is better music. The music is dark and slow, with lots of electronics as background, giving a soothening velvety feel to the overall sound, with a fixed rhythmic base over which the musicians improvise. Apart from electronics, the music has a rock approach, sometimes reminiscent of the electric Miles, but much darker and more modern, but also less intense and energetic, and the band integrates a lot, too much even, over a too simple framework, resulting in a jam band feel of a little higher order, but without doing anything spectacular either. Ron Miles is really great on this album, Jeff Parker is a little too much in a conventional mood to my taste, and Amendola is his usual subtle self. If they had reduced the whole program to something more condensed and focused, the overall effect would have been better. Now, its lukewarm.