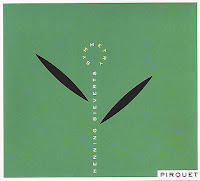 Many years ago during a music lesson at school, we were asked to play a variation on a given tune. One of my fellow-students played a tune which did not sound like a variation at all, since the original tune was totally absent. Asked what kind of variation it was, he said he had played it backwards. On this album German bassist and cellist Henning Sieverts does both : the structure of the songs are like palindromes : words wich can be read in both directions, as are the titles of the tracks on this album : Top Spot, Luz Azul, Evil Olive, Dr. Awkward, etc. That the structure is symmetrical and that the main themes are the same whether played forward or backward is of course nothing more than "spielerei", a formalistic intellectual game which adds nothing to the music as such. If it wasn't mentioned in the title, it would even be hard to notice. Yet it sets the framework for music which has a clever kind of lightness. The tunes are carefully crafted, light-spirited, joyfully dancing, still offering the musicians the chance to improvise and to do that with sufficient abandon to leave the formal restrictions. The band further consists of Johannes Lauer on trombone, Chris Speed on tenor saxophone and clarinet, Achim Kaufmann on piano and John Hollenbeck on drums. The music is nice enough, well played, but it stays within safe boundaries.

Listen to
Top Spot
Sun Is In Us

i just wanted to say thanks for this blog. for me it's what music blogs should be about, pushing new sounds and music. everytime i visit your site i am happy to see another new name and an interesting review. great work :)