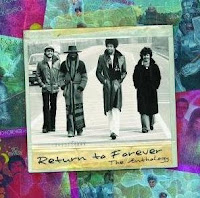 I am currently listening to one of the tracks of this album which will soon be released. The track is called "The Duel Of The Jester & The Tyrant", originally from the "Romantic Warrior" album, and it will now be part of "The Anthology", a compilation album released at the occasion of Return To Forever's reunion tour. What strikes me when listening to it again after a couple of decades is this. First, the absolutely stellar instrumental skills of these four musicians, second, their unbelievable breadth of musical knowledge (from Bach to Coltrane), third, their unbelievable sense of rhythm and interplay, fourth, their equally unbelievable lack of knowledge of what music is all about. I mean, despite all their incredible strengths, these guys haven't got a clue about what music is all about. And I mean it. They haven't got a clue. Technically, Al Di Meola is better than John McLaughlin (but not musically), Stanley Clarke is awesome and Lenny White brilliant, and Chick Corea, well ... there are no words for his talent. And yet ...
"The Romantic Warrior" used to be one of my favorite albums, I hate to admit. Listening to it now, I find it's still unbelievable, both for its technical mastership as for its being an icon of Kitsch with a capital K. It is pretentious, it is plastic, it is synthetic, it is devoid of emotion, it is dead, I imagine it's like having sex with an inflatable doll (not that I have any experience!). In the past few months, I've been bombarded with e-mails about the spectacular reunion and the wonderful anthology, and a special contest on top of it, and no doubt you have been too or will be in the near future. But on the other hand, and I must admit it, listening to their technical skills, it is still awesome,.... and awful.

... and here is youtube clip of the same track (and it's better live!)