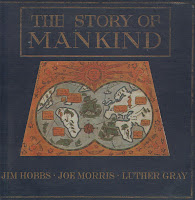 Saxophonist Jim Hobbs is probably best known as the leader of the insufficiently known Fully Celebrated Orchestra, his quartet with Taylor Ho Bynum, Timo Shanko and Django Corranza, a band that is funky, free and often hard-driving as a rock band.

On "The Story Of Mankind", Hobbs joins forces with Joe Morris on bass and Luter Gray on drums, for a slightly but not entirely different approach. The music is still rhythmic and free, but a lot more expressive and emotional.

The title of the album, and the titles of the tracks are taken from the famous (?) history book for children written by Hendrik Van Loon, a Dutchman who moved to the States in the early twentieth century, and who published his book in 1922. The cover art is a copy of the book's cover, as you can see thanks to my didactic illustration. 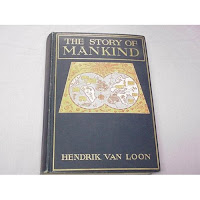 Although the liner notes give no information on this, we can assume that the different tracks are inspired by some of the passages in the history book.

Now, all that being said, this is a nice album, with some truly great moments. The first track "Then A Genius Bethought Himself Of The Use of Fire", is ok but not special, but as the album moves on, the expressivity increases. "Lost In The Vastness Of The Universe" starts very slowly with sparse arco and a sad sax, with the drums joining after a few minutes. "The Story Of A Word" starts with solo percussion, and when a firm middle-eastern rhythm is established, the bass and the sax join, for an equally middle-eastern melody. "Gunpowder" gets into a boppish mode, and "The Spreading Of The Idea Of Popular Sovereignty" is in my view the highlight of the album, with lots of tension and less straight-forward rhythms and structure, and all three musicians at their best : Morris using his typical notes, Luther Gray giving a very creative and subdued solo and Hobbs blowing sensitively and plaintive. All tracks are long and very open, giving the musicians lots of space to maneuver and to elaborate on the themes. Recommended.
Stef on Sunday, May 25, 2008
Share