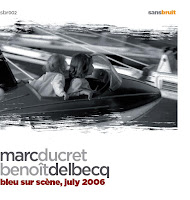 French guitarist Marc Ducret is best known for his collaborations with Tim Berne, but he already has close to a dozen own releases. French pianist Benoît Delbecq has played with numerous musicians, including Evan Parker, François Houle, with the French Kartet, recently with Poolplayers, and he has of course also released several own CDs. I think Ducret and Delbecq played only once together on a record and that is on Ducret's "Qui Parle". This duo recording is a live performance from 2006 and it is excellent. Delbecq's prepared piano creates unusual sounds and timbres, creating a slow eery environment on "Asiatiques", the first track. On the second track Ducret's guitar is more prominent and both musicians create an odd-metered composition, halting and moving forward, unison and in counterpoint, moving away from each other and coming back again. As usual, Ducret's guitar sounds unusual. Yet despite the unusalness of both musicians, and despite the adventurousness of the often eery compositions and improvisations, this music sounds gentle, familiar and close, intimate even. The lyricism is absolute, and this without the need for an obvious melody, they can relinquish known sounds without needing to create chaotic dissonance. On some tracks, such as "Un Peu D'Histoire", the music is built around shifting rhythmic patterns, and hardness of playing, which can move a single piece from dramatic to more intimate moments. But the duo is at its best when Delbecq uses his extended piano techniques to the full, as on "Le Même Jour", creating outlandish sounds with his left hand, while playing a tune with the right hand, echoed by long notes from Ducret, giving the music a depth which is quite unexpected from a duo setting. Ducret's playing has the same intensity, moving from gentle playing over high-toned sounds or the musical equivalent of shards of glass. Interesting and very creative music.

And the album is the second release on - again - a new French label, Sans Bruit. Let's hope they bring us more music of the same quality in the future.