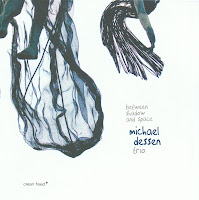 I have been checking how many trombone-bass-drums trios I know, and there aren't many, but that probably says more about my knowledge than about their existence. Steve Swell has a few, so does Julian Priester, Jeb Bishop has one and there is of course BassDrumBone, with Ray Anderson, with several CDs. Now there is the Michael Dessen Trio, and one which can stand its ground in the list of the above bands. The trombonist has a great sense of music, very lyrical and structurally complex while giving the appearance of lightness and openness. The long title track "Between Shadow And Space", was inspired and originally composed to accompany a poem by Pablo Neruda, and some Pentagon texts, but those were taken out in the end. The long piece brings lots of thematic and structural variations. The second track "Chocolate Geometry", starts with a clear melodic structure, but looses all footholds for abstract improvisation, with sparse notes, electronics and brushes recreating the impression the musicians had from the paintings of Mariangeles Soto-Diaz, moving back to intense acoustic playing at the end of the track. The great thing about this CD is not only the unbelievable precision and skills of the three musicians, but also the interesting compositional power of all tracks. "Restless Years" for instance, has a fixed bass line by Christopher Tordini, over which Tyshawn Sorey plays intricate polyrhythms, with Dessen playing slow trombone tones over it. As the drum intensifies and even picks up speed, the bass remains imperturbable. On "Anthesis" the bass gets the opportunity to carry the tune, bringing a long intro, with lots of variations, the drums join somewhere halfway, offering the solid foundation for the bass to evolve even more, and only then does the trombone join, very lyrical and melodic, enjoying the openness created by the bass and adding to it, intensifying it, expanding it, taking the rhythm section along. "Granulorum" is more subdued, with slow moving soundscapes, with electronics thrown in at times, but disciplined, well-balanced, opening and ending the tune, and the last track, "Water Seeks", even deepens that approach, creating an interesting wall of overlaying sounds, a sonic tapestry that is as hypnotic as it remains ethereal. An excellent debut : fresh, creative and open.


Listen to
Between Shadow And Space
Chocolate Geometry (for MSD)
Anthesis
Water Seeks
Stef on Friday, May 30, 2008
Share