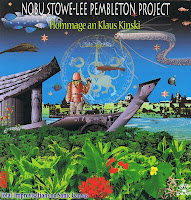 Those who know Nobu Stowe and Blaise Siwula's fully improvisational records, will be more than thrilled by this one. Stowe joins forces with Lee Pembleton, "sound designer". Other musicians include Blaise Siwula on sax and clarinet, Perry Robinson on clarinet and micro-ocarina, John McLellan on drums and Ross Bonadonna on bass clarinet, alto saxophone and guitar. An unusual line-up for an unusual album. Although the album is dedicated to German actor Klaus Kinski, it has as much to do with director Werner Herzog as with their regular soundtrack composers, the prog rock band Popol Vuh. The musical concept is odd. First, most of the musicians play extremely lyrical and often "inside", with repetitive phrases and distinct melodies, and that is especially true for Stowe's piano which provides the backbone for the improvisation. Second, in the improvisation, the musicians all play together, or rather, in different layers, sometimes responding to each other, sometimes playing on a different plane, which gives the odd effect of a crowded musical environment, in which each instrument occupies its alloted space. Third, there are no clear solos. The whole thing is a total musical experience from beginning to end, and fourth, the electronics and ambient sounds thrown in by Pembleton give some strange overall atmosphere to the music. Fifth, all pieces are slow and serene, intense yes, but not harsh. And if you think that all this is the perfect recipe for chaos, you are mistaken. Even if uncommon, the music on this album is beautiful, lyrical, melodic, expressive, expansive, ... with layers of sound, constructed of accessible harmonics, shifting from piece to piece, opening up new aural vistas. A great musical concept and a strong performance.