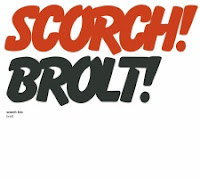 It takes some listens to come to appreciate this band, consisting of Finnish guitarist Raoul Björkenheim, and Norwegian rhythm masters Ingebrigt Håker Flaten and Paal Nilssen-Love. This is their third release, after Scorch Trio and Luggumt. This is a band with lots of rock and punk in spirit, combined with a more intellectual inquisitiveness into the nature of sound. The spirit of the music is anger, revolt and rage even, played in very direct emotional outbursts, but the sound inquisitiveness give this anger a touch of uncertainty, a kind of despair, a big question mark too above the exclamation marks on the cover. The musicians integrate both dimensions in their playing, which can be down-and-out rock, or very avant-garde explorations. Just compare the violence of "Olstra", the opening track with the more subdued and eery atmosphere of in the first half of "Gaba", a piece that evolves into a totally disorienting musical experience. True, there are some electronics involved, but it's still phenomenal to get this massive sound just out of three instruments, without overdubs. Even in the more rock-oriented pieces, as on "Graps", the three musicians manage permanently to get outside the rhythms as you would expect them, adding to the overall feeling that something is not quite so right. And that's a real compliment for their mastership : to avoid all predictability, and yes, they sometimes flirt with fixed rhythm or bass vamp, but just for a few bars, used as a launch-pad for the explosive departure of yet another rocket. Raw! Not for the faint of heart.

Watch a clip from a performance in Finland in 2006