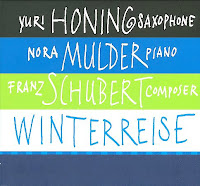 More musicians have tried to blend classical music with jazz, but few have done it so reverently as Yuri Honing and Nora Mulder do here. Honing basically replaces the vocal parts in Schubert's lieder, but he does so with lots of emotion, and with a jazz feel. This is classical music, but then again it is not. There is no improvisation here, but Honing's sax does not sound like a classical sax. Mulder's piano playing is closer to what you can expect. The sax plays well too, but once in a while it sounds a little bit bland. You would expect either the clear pure perfection of a classical musician or the unbound power of a jazz musician, yet Honing keeps it in between. Nevertheless, for those who like cross-over initiatives, this is certainly one worth looking for. 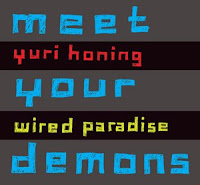 A double electric guitar front plus electric bass, added with sax and drums, and you know that this is not your regular jazz outfit. The band consists of Yuri Honing on saxophones, Frank Möbus and Paul Jan Bakker on guitar, Tony Overwater on bass guitar and Joost Lijbaart on drums. The music is also not jazz, it sounds more like new wave from the 80s, but then instrumental and with a quasi-jazz band. The band brings lots of variations, from rhythmic power play with screaming guitars on the title track, over sensitive gentle compositions like "Lost", to Bowie's "Wild Is The Wind". It misses the inventiveness and adventurousness of a Jim Black, but this may appeal to a rock audience (and hopefully move them to jazz).

Watch a series of extracts from a live performance of "Wired Paradise" in Paradiso in Amsterdam.