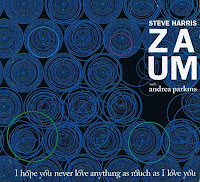 I must take back what I said about electronics in a recent review. Sometimes electronics can add wonderful power to music, as is the case on this sublime album by British drummer Steve Harris, who sadly passed away in January of this year. I assume that this must be his last album, and it makes it clear that he left us too soon, also musically speaking. This fully improvised set, recorded in St. Aldhelm's Church, Poole, Dorset 21st October, 2006 (again a church!!), is really boundary-shifting without being totally inaccessible. Yes, it demonstrates that with the right musical vision, instrumental skills, a coherent approach and creativity, it is still possible to bring something new and enjoyable, with no compromise to commercial considerations. The musicians are all from different backgrounds, from classical over jazz to more rock-oriented bands, and include Cathy Stevens on violectra, Geoff Hearn on saxophones, Karen Winhurs on clarinets, Udo Dzeizanowski and Jim Black on guitars, Andrian Newton on samples, Andrea Parkins on accordion and laptop. Kathy Prince, Tina Leeming, Fliss Kingston and Julie Harris bring the vocals on two tracks. The music is ambitious, creating weird and unreal soundscapes, sometimes eery and flowing, mostly with a highly rhythmic basis, full of electric intensity and great soloing, without (too much) chaos or dissonance. Yet the overall effect is brilliant at times. Highlights are the second piece "From Dancing Ledge" and the last track "Watt's Curve", which pulls the listener in various directions, from slow melancholy to high energy moments, built by howling guitar and battering drums, slowing down again for sax sadness and percussive resignation. Another great thing is the constant variation. You could expect that a fully improvised album with so many musicians could lead to boring repetitive approaches but that is not the case : every track has its own story to tell, and many tracks even several, bringing surprises and new angles in the music. And if all the musicians are great on the album, also in their restraint and capacity to dive in at the right moment and keep quiet at others, the real hero of the album is Steve Harris himself, who moves about his drumkit subtly yet leading, full of rhythmic creativity. Deeply emotional avant-garde, a real feat.

Listen and download at iTunes (although the samples are really too short to give a good idea about the music's light expansiveness).
Stef on Sunday, May 11, 2008
Share