I like Wayne Horvitz, if only because of his broad knowledge and approach of musical genres. In that sense he often reminds me of Bill Frisell and Michael Blake, who are also as much at home in rock music as in traditional jazz or the avant-garde and are willing to explore all, in different projects or by mixing the genres. Their open ears and large technical scope clearly offer different angles and enriches the creative process. Horvitz has had 13 different own musical projects so far, next to his collaborations with amongst others John Zorn's Naked City. His most famous projects include the defunct funky Zony Mash, his improv jazz-rock band Ponga, and his "Sweeter Than The Day" band, which brings one of two new releases. And both bring a subgenre of jazz which is unique. To have created only one subgenre would be a wonderful element on anyone's resumé, but two? 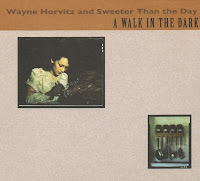 Next to Horvitz on keyboards, the band consists of Timothy Young on guitar, Keith Lowe on bass and Eric Eagle on drums, the latter replacing Andy Roth. The band's music brings a wonderful and unique melodic blend of light-footed bluesy rock-oriented jazz, extremely refined and enjoyable. The band started as an acoustic version of Zony Mash, with the exception of the electric guitar, but musically actually improving on the original concept. As with the two previous CDs, the music is very melodic, rhythmic, danceable even, a jazzy kind of rock devoid of anger, harmonically enriched mid-tempo blues, cleverly constructed, without instrumental pyrotechnics, just simple (on the surface) plain fun, with lots of tempo and rhythm changes. So, a real treat, again, although there isn't the slightest shift in the musical approach as compared with the previous ones. But the quality was already so high that this is probably a good thing. Have fun!

Listen to
A Walk In The Dark 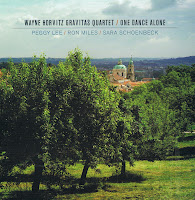 This is the second release of the Gravitas Quartet, with Peggy Lee on cello, Ron Miles on trumpet and Sara Schoenbeck on bassoon. Whereas the first release "Way Out East" contained a more avant-garde feel, with lots of use of extended techniques, "One Dance Alone" comes closer to the accessibility of Sweeter Than The Day, but then in a real chamber jazz environment. The band and the music were specifically created with these musicians in mind, with the explicit intention to mix composed themes with small group improvisation. And the band is a perfect fit for the music : all four musicians are extremely gifted, but also manage to play in a very focused and self-effacing way : the instruments just build the music together, as a whole, not as consecutive soloists supported by the other three. And whereas Sweeter Than The Day is fun and light-hearted, this band is dark en deeply emotional, full of melancholy themes and romantic moods. Despite the big difference between the two bands, the music is still unmistakeably Horvitz. The great success of the album is the similarity in approach of the four musicians : perfectionists with a very precise touch of their instruments, playing with lots of clarity, moving effortlessly between classical music and avant-garde or jazz improvisation. Of the composer's many projects, this is clearly a winner, and one that will hopefully continue to perform and record.