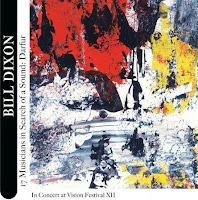 This is probably one of the first recorded pieces for large ensemble by Bill Dixon, who is best known for his very avant-garde duo or trio albums. This release was commissioned by Arts for Art, the producers of the Vision Festival for the 2007 event, together with Roy Campbell’s Akhenaten Suite and William Parker’s orchestral work Double Sunrise Over Neptune (due in August).

"17 Musicians In Search Of A Sound : Darfur" is a long musical suite, centered around the long "Sinopia". Sinopia is the color of dry earth, the color underpinning oil paintings. The color is red. The color of blood. Short tracks full of foreboding, dark and menacing horns, playing slow, magnificent, cinematic music, verging on classical, in which low unison tones build a horrifying dramatic atmosphere, with percussion added to for full effect, rather than for supporting the rhythm. In some of the initial moments, the cello and arco bass strain away from the unison theme to create some dissonant sounds, on some of the other tracks, the dark wave of sound stops to let the individual voices of the various instruments wail and weep, in duet, or with the full band, creating full and intense chaos, stopping abruptly and rejoining the ranks of the main sound. On "Scattering Of The Following", the individual instruments get their first chance for real improvisation, with trumpet, tuba, bass saxophone and vibes setting the scene, one full of disarray and emotional distress. The tune "Darfur" offers the darkest pieces of orchestrated gloom and doom you may have heard so far, stopping halfway for squealing sax sounds and screeching arco bass, supported by irregular drumming, moving the music to a crescendo of despair, which is followed by solo trumpet, intervening arco bass, and slowly the whole ensemble joins, slowly, irrevocably.

"Sinopia" starts with baritone solo, and slowly evolves into the most avant-garde moment of the record, with one instrumental solo taking over from the other, and though the various musicians freely improvise, there is clear structure about when what happens and about who does what, even if the content itself is free, but gradually they start weaving a coherent sound, all contributing to the overall darkness, despite the diversity of sounds created by the individual instruments. It is both primal and funereal, ending in sheer agony.

This center pieces is followed by four short tracks, mirroring the opening tracks of the record, again with slow dark, gloomy and menacing ensemble sounds, called "Pentimenti", meaning traces of changes made by the painter, showing that he has changed his mind and started differently. The references to painting, both in the titles and on the cover, also demonstrate the composer's interest in creating colors of sound, creating new mixtures, new approaches, and he succeeds in this.

The end result is surely one of the musical highlights of the year. It is uncompromising, but clever, with a band of great musicians who play in an incredibly controlled and focused manner. And it succeeds in every aspect where Evan Parker's "Boustrophedon" falls short. It uses the orchestra to its full potential, creating true music, powerful, deeply emotional, coherent in the impactful listening experience it creates. Bill Dixon manages to create a wide array of musical emotions through playing with music's endless possibilities, while at the same time touching upon the tragedy of Darfur. This is a strong and powerful musical statement. And it is infinitely sad.