Miles From India - A Celebration Of The Music Of Miles Davis (Four Quarters, 2008) * 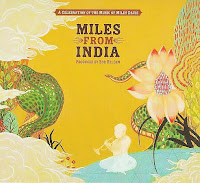 Plain horror! I have no other words for it.

... or an exercise in bad taste. Miles must sell, and probably will ... but ... this isn't Miles, this isn't Indian music either. One more record in the "how-to-mistreat-the-Mile-legacy" catalogue, and a nice example of music for which the whole is a lot less than the sum of its parts. Avoid at all cost.

Least it has a nice cover ;)