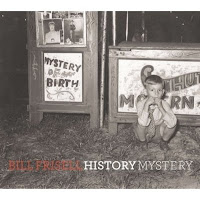 Thirty tracks spread over two CDs bring a great overview of Bill Frisell's signature music, mixing styles such as blues, jazz, country and african in one great blend of soft, gentle, clever, and technically superior playing, not only by him, but by the whole stellar cast of musicians he's lined up as usual, with Jenny Scheinman on violin, Tony Scherr on bass, Kenny Wollesen on drums, Eyvind Kang on viola, Greg Tardy on clarinet and saxophone, Hank Roberts on cello, and Ron Miles on trumpet. The musical universe Frisell creates is one of carefully crafted little musical explorations, full of sympathy and sadness, little pieces of candy for the ear, sweet, melting and then they're gone. On the few tracks that are a little longer, a little more drama seeps into the music, as in "Baba Drame" (which already appeared on The Intercontinentals), "Waltz For Baltimore", or "Struggle, part II", with its dark bluesy guitar solo, but which gets a totally unexpected turn towards the end. Four tracks are even shorter than one minute, and eleven tracks shorter than two. This is not irrelevant, because Frisell really manages to tell a story in such a short time span. The whole album is the result of several recording sessions, including a live performance, which offers a lot of variation, without negatively influencing the coherence of the overall mood.

I know this is not free jazz, it's most of the time not even jazz, but it's certainly well worth listening to.
Stef on Tuesday, June 03, 2008
Share

I'm seeing Bill Frisell, Eyvind Kang & Rudy Royston this coming weekend in Eugene, OR. Hopefully they'll have some of these CDs with them for sale. I saw it at Borders and it was quite expensive...

Anyway, I'll post a review of the show (probably by Sunday afternoon) over here: http://jazzsick.wordpress.com