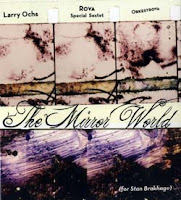 Some years ago, I might have put this CD away after ten minutes, because of its weird soundscapes with instruments weaving apparently uncoordinated sounds into even more indiscernible textures. Today, I find it has a staggering beauty, an unusual aesthetic and a fragile sadness, which is rare. That Larry Ochs is capable of great music, is no longer a mystery. Here, he takes on a real project, a tribute to the film of avant-garde director-painter Stan Brakhage, who was most known for his handpainted - yes, image after image - soundless films, and for which Ochs has aligned two bands for a dual approach. The first CD is called "Realization 1 : Hand" and the second "Realization 2 : Wall". Musically both records are close, but surely far from identical, and that's not only due to the line-up. On "Hand", the music is played by Orkestrova, consisting of John Schott on electric guitar, Joan Jeanrenaud and Theresa Wong on cello, Lisle Ellis on bass, Ben Goldberg on contra-alto and Bb clarinets, Toyoji Tomita and Jen Baker on trombones and didgeridoos, Darren Johnston and David Bithell on trumpets, Steve Adams on bass flute, Jon Raskin on baritone sax, Tim Perkis & Matt Wright on electronics, William Winant and Gino Robair on percussion, Bruce Ackley on Bb clarinet, Moe! Staiano on percussion, and with Larry Ochs on "traffic control". And despite this big band line-up, the music retains its light quality, a level of openness and transparency, with musicians joining and leaving the overall soundscapes. There is lots of dissonance and unexpected sounds to be heard, yet they are as related to the colors in Brakhage movies, moving dynamically along, not always clear what the end result will be, but contributing to something utterly bizarre and attractive. The first CD starts very calmly with the trumpet playing in slow tones over a melting pot of sounds, that slowly flow even if they do not always blend into one harmonic whole. It moves on through moments of great dissonance but at the very end, the slow sadness comes again, with the trumpets playing bluesy tones, supported by the guitar and with the baritone sax taking care of the rhythm, which is changed on the last track with the didgeridoos giving the basic rhythm (and muted shouts!) and the sax taking over the plaintive and sad singing.

The second CD, "Wall", is brought by the Rova Special Sextet, consisting of Bruce Ackley on soprano and tenor, Steve Adams on alto, Larry Ochs on tenor and sopranino, Jon Raskin on baritone, and with Gino Robair and William Winant on drums and percussion. It starts with a violence that is absent on the first CD, with the full horn section blowing away on the short first track, "Hit", which moves on into the equally short "Hung", with the rhythm section creating a strong forward movement for the saxes to interact, at first forcefully, yet alternating with melodic parts, culminating in absolute frenzy on the third track, with an unrelenting and uncompromising energy, which only stops halfway the CD, with the track "Pulsar", which contains slow drumming and percussion. After that, the musicians play in smaller units, one sax with drums, leaving more space, with more orchestrated and unison sounds, but that doesn't last long. With "Ruin", a steady rhythm moves the band back into the realm of sound bombardments, with the four saxes playing together, then each doing his own thing, then miraculously coming together again. This is not easy listening. It is hard, intense, raw, at times an assault to the ear, much like Brakhage's films are at times an assault to the eyes, but not always, beauty emerges, yet the real listening value lies in the total adventure that Ochs serves us here.

In that sense both CDs are indeed each other's mirror image too, with the first having a lighter texture despite the heavier line-up, and the second one being a wall of sound built by only six musicians. Structurally, they could also well be each other's mirror image, with the intense chaotic part at the center of the first CD, whereas the center piece of the second consists of light percussion in the middle part. Whatever, it's a rough journey, but one well worth taking.

First CD is on emusic, as well:
http://www.emusic.com/album/Larry-Ochs-and-Orkestrova-The-Mirror-World-for-Stan-Brakhage-Realization-MP3-Download/11209006.html

Thanks, I hadn't noticed.