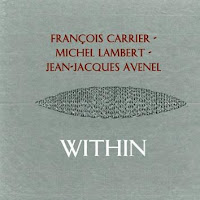 The reason why François Carrier is a great musician is simple : he has a kind of total approach to authenticity, in the sense that he always tries to bring a deep emotional and spiritual experience. The focus of all his albums seem to be pointed at that one thing, to create a moment in which this experience becomes real and felt by the audience. And whether he does that with a strange mixture of instruments as on Happening, or by having a straight duo CD with just sax and drums, as on Kathmandu, the overall effect is the same. His music has changed over the years to achieve this level of refined directness. His first albums were still encapsulated in the mainstream, with clear melodic lines, themes and structures. In the last years he has moved away from that, playing fully improvised music, but with focus and with lots of technical skills, both on the instrument and on the interaction with the other musicians. His tone is warm and buttery, very sensitive, welcoming the audience into the music, inviting them to share the musical journey (in contrast to many of today's musicians who find interesting ways of creating a distance with the audience, alienating them). Michel Lambert is the perfect partner for his music, adding polyrhythms and creative drumming, often with lots of energy, adding intensity to Carrier's carefully built lyrical sax phrases. Having French bass-player Jean-Jacques Avenel join is a great idea. His skills on the instrument are excellent and he finds the right tone to enrich the trio. The CD constists of three pieces, one clocking even over forty minutes, but that should not deter you. Despite the small line-up, the trio has sufficient ideas for variation to keep the attention going. There is a long bass solo with powerfull percussion from Lambert to create depth, there is a short kalimba piece somewhere in the middle, meditative moments alernate with fierce and intense interplay. Adventurous and welcoming : that is a rare combination. Later this year Ayler Records will bring even more live recordings by him. Enjoy this one and look forward to what's coming!