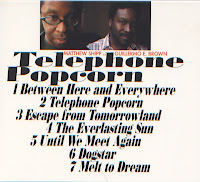 Here are pieces on which Matthew Shipp is at his most lyrical, playing nice, often hypnotic and beautiful chords and figures, with Guillermo E. Brown on zendrum, laptop and electronics acting as a kind of disturbing element or jamming station, adding odd sounds, even odder rhythms for Shipp to react on. The music was recorded in 2005 and it's only now being released by the Italian Nu Bop label. I can imagine it was hard to find a label to bring this music, because it's far from conventional, let alone that it has any sales potential. Some of the music is still relatively accessible, with themes reminiscent of some of Shipp's best pieces for Thirsty Ear, but most of it is quite adventurous, not in the music per se, but because of the electronics and distortion of the sounds, which are hard and abrasive, as if the normal tunes and sounds are being sandpapered. That is literally what you can hear. On other tracks, every sound is being echoed by static noise. The whole idea was indeed to bring a new angle, a new approach to music, but it only succeeds partly, and then only on some of the tracks. Most of the music here sounds self-destructive.

And by the way, have you ever read words as arrogant as these : "my piano playing is the direct result of the fact that my mind and the cosmic mind that sustains the universe are in harmony-so when I play I intercept electro magnetic frequencies directly from the mind of god and can convert them into lyrical phrases on the piano". On this CD either god had a bad cold, or there was something wrong with the circuitry connecting the almighty to Mr. Shipp.

This is the third release by Matthew Shipp this year. The first one "Right Hemisphere" was excellent. His second solo release "Un Piano" I haven't heard yet, and I am also looking forward to a possible future duo release with Mark O'Leary. I sincerely hope "Telephone Popcorn" is the lesser one of the four.

"Un piano" is a stellar recording

Wow, that's a shame to read that comment that Shipp made about his Piano playing. Granted I am a newbie to his recordings, in general I really enjoyed 'Harmony and Abyss' and 'Equilibrium'. However, I may still check out this recording. Whether or not he was aligned with the Cosmos on that particular day.