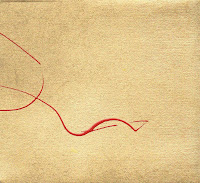 This piano trio consists of Jobic Le Masson on piano, Benjamin Duboc on bass and Didier Lasserre on drums. When I first listened to it, I got some faraway memories of the Chick Corea, Dave Holland and Barry Altschul album "A.R.C.", a brilliant album that I found rich, hard, intense and uncompromising in its avoidance of recognisable tunes (although they covered Miles Davis' Nefertiti). This album is more modern, but it fits within the same legacy of piano trio music. Le Masson is creative and unpredictable while remaining focused, and bass and drums move along as easily as the musical thoughts evolve. The ease with which Duboc switches to arco and back to pizzi is surprising, and Lasserre's being "in the music" with his drums is strong, more accentuating the evolution of the thoughts than offering an explicit rhythm. The intensity and energy with which the album starts is kept throughout the album and that's a major feat in itself, but Le Masson manages to keep in his improvisations a high level of abstract lyricism and sensitive power. And even in the slower movements, as half-way the second piece, their interplay is immediate and on the same level, maintaing their unique cohesiveness, moving their music in a pointillistic kind of action painting. Again an excellent album from this young French label.

This disc is amazing!
It's great that people like you help music of such quality reach its audience.
Keep them coming.