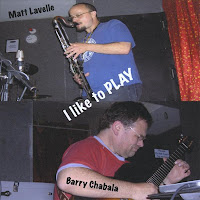 From some of the first tracks of the CD I wasn't quite sure that Barry Chabala could play guitar, but after a while my early misconception proved wrong (again, and sorry for that). The point is, he doesn't play in a conventional way, he creates sounds on the strings - and sometimes on the body of his guitar - regardless of conventions, often hesitantly without much "stage presence". Sometimes it sounds bizarre, or even like a beginner playing around on the strings, but what he does still has coherence and direction. Matt Lavelle builds his lines (on sax or trumpet) around this, reacting fast and intense, leading to a strange mixture of sounds. They play as if they were sitting in the same room as you, that intimate it sounds, yet it is not intimate in the traditional sense, because you don't get any comfort as a listener. They move you to interesting territory, with tradition never far away, and even a traditional blues perks up its head, adding some warmth to the proceedings, while at the same time throwing the traditional elements of the blues overboard. This is friendly and nice, two guys having fun in playing together. No great ambitions, no pretence, just two guys enjoying themselves creatively, although some of the tracks are great, such as "Is That A Trumpet In Your Pocket Or, Um?", which is a long uptempo nervous, boogie-influenced, chasing duet. As the title says : they like playing.