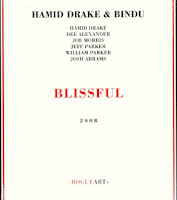 Hamid Drake is not only a great drummer with a very recognizable style, he's also carved out his own niche of spiritual world jazz, almost always in collaboration with bassist William Parker. On "Blissful" they move a step further from "Piercing The Veil" and "Summer Snow", now completely merging jazz with world music, by adding the guitars of Jeff Parker and Joe Morris, and the bass of Josh Abrams. Next to their usual instruments, other more exotic ones join the party : shenai, guimbri, doson ngoni, tabla and banjo. As the title suggests, the music's goal is a spiritual one, here illustrated by the poems by Ramprasad Sen , an 18th Century Indian poet, who worshipped Kali, the "Divine Mother" in hinduism, the female principle, but also the goddess of destruction, not in the physical sense, but rather of ignorance, self-centeredness, and the like. The poems are narrated and sung by Dee Alexander, and her task is not an easy one, because Ramprasad's poetry is not only not very poetic, it's also not very lyrical, with lots of abstract words and unequal rhythm. To give you an idea :

"O Mediator, hold this astonishing feminine presence
at the center of consciousness
Her three eyes are the moon of tenderness, the sun of power,
and the cosmic wisdom fire that dissolves the universe.
Her gaze creates a lover's intimacy.
This Warrior Woman, fountain of blessing,
whose daughter is she?
What motives draws her into the battlefield
this vast display of universal suffering?"

And this is just a small extract of the very long poems. Her singing is excellent, but the lyrics are awful, and - despite their possible value in terms of content -are in fact the antithesis of the music, which is, like the other albums by Drake and Parker, full of energy, rhythmic complexities, while still being unbelievably pure and authentic. The best tracks on the album, in my view are the ones in which there is either no singing, or just worldless singing as on "Visions Of Ma". On his other albums Drake managed to create an immediate and deep spiritual intimacy, strongly expressed by the limited instrumentation and his own reverent singing. Now, the higher complexity of both the instrumentation and the emotionless, too abstract philosophical lyrics, create a distance which should not be there. Otherwise, the music is nice, with lots of North-African, Central African and Asian melodies and rhythms, and the interesting mix of instruments leads to really great moments. Listen to the end of "Supreme Lady Victorious In Battle", which really becomes great once Dee Alexander's singing becomes wordless improvisation, or to "There Is Nothing Left But You", a duo between frame drum and vocal, on which Dee Alexander is brilliant as long as there is no text to sing, truly using her voice as an instrument in its own right. Strangely enough, when Drake sings on the last track, he does so in hindi (I think), and the match is better. My feelings are mixed, I feel attraction and repulsion at the same time.

But I must admit, I'm not a vocals fan, and I'm surely not a fan of spoken word in music.

I hear ya on "I'm not a vocals fan," at least with respect to jazz. Yuck... jazz vocalists (for the most part) turn me away.