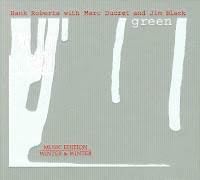 This is bizarre music. Cellist Hank Roberts has always had a penchant for doing his own thing, but what he does here requires courage. He brings his music with a sentimentality that is out of the ordinary, unafraid to sing his wordless songs, the German word "Weltschmerz" is what comes to mind, a world full of pain and longing, a kind of spiritual (dis)satisfaction, and deep emotionalism that exists per se. Next to those dark, brooding, atmospheric or meditative pieces, he adds some rock and pop influenced songs. He is joined by Marc Ducret on guitar and Jim Black on drums, both the exact antithesis of Roberts, always edgy, direct, angry often, offering a good antidote for Roberts's melancholy. The non-meditative pieces are also of interest. There are some musically complex little gems, like "Cola People", or even straight rock songs, like "Trees". There is the funky "In the 60s", with different layers of guitar and cello, on which both Black and Ducret can demonstrate their rock nature. Roberts' attack on his cello is broad too, from classical over jazz to sometimes even slide guitar kind of sounds. As a reviewer, this makes it difficult because he's impossible to pigeon-hole. I prefer his slow, melancholy pieces, on which he mixes world music influences with jazz and yes, whatever creative ideas for new angles he has. Despite the gentleness of the album, I'm not sure Roberts' music will appeal to mainstream fans. Yet on the other hand, the direct sentimentality and sweetness will require some open-mindedness from the avant-garde fans.

I don't like his singing, but that's a question of personal preference. This is an interesting, varied and courageous album. The variations in genre were at first listening a little too wide, but on further listening they seem to fit. The emotional authenticity behind them obviously comes from the same source, making this a coherent album.