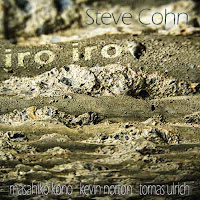 Iro Iro means "this and that" in Japanese. Iro means color. On this CD multi-instrumentalist Steve Cohn brings the concept of his chamber ensemble a step further. He plays the piano, shakuhachi, hichiriki, shofar, ektara and percussion, and the band further consists of Masahiko Kono on trombone, Tomas Ulrich on cello and Kevin Norton on drums, vibes and percussion. Usually the concept of chamber jazz is limited to bands without drummer, but Kevin Norton's approach is so light and perfectly fitting the musical concept, that it could still fall within the genre. The music is avant-garde, but varied, with meditative moments, with lots of openness, as on the second track, or extremely hectic and intense moments of interplay, as the beginning of the third track. The fourth track starts with Cohn's subtle and melodyless piano-playing and you have to give it to him : his touch is fresh, unusual, and sensitive, which sets the tone for the rest of the piece. The cello joins in the same vein, with subtle pizzi lines, supported by gently accentuations of the drums. Masahiko Kono truly is a good choice on the trombone, because of his precision and capacity of slow developments, creating sounds and being present without being overwhelming. Nuance and sophistication seem to be the guiding principles of the improvisations and of the interplay. Adventurous though this music may be, it is still sufficiently accessible, with strong emotional moments, and hence, as is too often the case with avant-garde, not only concerned with form. Recommended.